> Actualités > The TAAF sign the joint Declaration of Overseas Countries and Territories for the Ocean!

The TAAF sign the joint Declaration of Overseas Countries and Territories for the Ocean!

The TAAF attended the Oceans Conference organized by the Association of the Overseas Countries and Territories of the European Union (OCTA), held in Brussels on the 16-17 October. On this occasion, all the Overseas Countries and Territories signed a joint declaration project for the Ocean, which is based on the three pillars of sustainability: the environmental, economic and social dimension of the oceans. 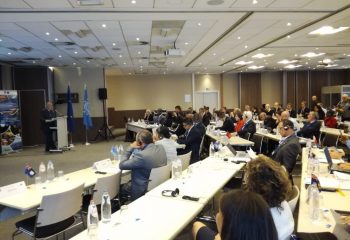 Address by Mr Serge Segura, France's Ambassador for the Oceans, at the opening of the OCTA Oceans Conference

Although Overseas Countries and Territories (OCTs) are not part of the European Union (EU) itself, they remain associated with it and collaborate on many topics, including issues related to the preservation of the environment.  While the OCTs are characterized by a great diversity from an economic, geographical or legal point of view, they share, however, common challenges related to their insularity and the importance of their maritime domain.

The OCTs cover an Exclusive Economic Zone (EEZ) of more than 17 million km², making it the largest maritime zone in the planet. Oceans are therefore of particular strategic importance for the OCTs. Four of the ten largest marine protected areas in the world are in the OCTs, including the national nature reserve (NNR) of the French Southern Lands and its perimeter of protection, which together make up the largest of these four MPAs with 1.6 million km².

Oceans have also become a central part of the international agenda and will be the focus of the future discussions at the 2019 Santiago Conference on Climate Change (COP 25) and the Decade of Ocean Science for Sustainable Development (2021-2030).

In this context, a conference dedicated to the oceans was held this week in Brussels, organized by the Association of Overseas Countries and Territories (OCTA). Bringing together 22 OCTs, the OCTA aims to promote OCT common positions for sustainable development to the EU through cooperation, capacity building and communication.

Signature of the Declaration of the OCTs for the Ocean in the presence of Eugene Rhuggenaath, OCTA President and Prime Minister of Curacao

These two days of conference have made it possible to address the environmental, economic and social value of the Oceans for OCTs through concrete and enlightening stories from the OCTs present. The Taaf participated in all these reflections and intervened notably during a session on MPA management by presenting the case of the national nature reserve (NNR) of the French Southern Lands and its inscription on the World Heritage List. The message of the TAAF on the strong link between research and management thus resonated with the opening words of Pascal Lamy, former European Commissioner for Trade, recalling the importance of improving knowledge of the marine environment, particularly in terms of scientific cartography and inventories.

A high point of the OCTA’s Oceans Conference was the signature of the Declaration for the Ocean by all OCTs present, including the TAAF. This document is part of the OCTs’ advocacy efforts for a better integration of Oceans into EU policies. As the OCTA President and Prime Minister of Curaçao, Eugene Rhuggenaath, reminds us: “without the ocean, no more life, without the ocean, we, OCTs, are nothing”.

It is now time for moving from words to action by implementing the OCT ‘s Declaration for the years to come. All participants to the OCTA’s Oceans Conference are now returning to every corner of the world with new opportunities for collaboration to ensure a healthy ocean.

Do you agree to the use of functional and tracking cookies for audience measurement purposes and for the proper functioning of the site? En savoir plus
I agree I refuse