Between land and sea: boundaries consistent with the stakes

A glimpse of the French Southern Lands and Sea

An exceptional and unique natural heritage?

The islands of the French Southern Lands and Seas are the largest emerged lands in the Southern Indian Ocean. Their waters are very productive due to their oceanographic and geomorphological characteristics, and support a species-rich food web. The concentration and diversity of seabirds and marine mammals in this ‘‘oasis’’ for biodiversity in the heart of the Southern Ocean is one of the highest in the world. This rich, wild nature set in vast extraordinary volcanic landscapes gives the territory its outstanding value.

The property is so vast that it is representative of the biodiversity of the area, and it protects all the ecological processes essential to the conservation of the species it hosts. It also plays a key role in the health of the oceans worldwide, especially when it comes to regulating the carbon cycle.

Thanks to their remoteness from human activities, the French Southern Lands and Seas are an excellent territory to study the biological evolution of species. They are unique for research, especially for long term monitoring of bird and marine mammal populations, and the effects of global changes. The territory has been benefitting from the technical and logistical support of the French Polar Institute Paul-Emile Victor for over 50 years. The TAAF, via the national nature reserve of the French Southern Lands and with support from the scientific community, have set up an efficient and reputed management system that ensures the integrity of this unique heritage for future generations.

The World Heritage Centre has defined 10 criteria for selection (6 cultural and 4 natural) of which 3 are met by the French Southern Lands and Seas, i.e. the natural criteria vii, ix and x.

The French Southern Lands and Seas are one of the last places on Earth whose natural heritage remains wild. The concentration levels of birds and marine mammals are unique—there are huge king penguin rookeries in Crozet, a large colony of Atlantic yellow-nosed albatrosses on the vertiginous cliffs of Entrecasteaux in Amsterdam, and the world’s most important sea elephant population in Kerguelen. The property has an outstanding value thanks to its rich, wild nature and vast extraordinary volcanic landscapes. It is a source of inspiration for all.

Crozet archipelago is home to the largest king penguin population in the world. They gather in extensive rookeries, as on Cochons despite the effects of global warming, and on Est and Possession islands.

Les Apôtres islands seem to burst out of the ocean. Their basaltic cliffs shelter gray-headed and black-browed albatross nesting sites. Access to these islands is forbidden.

“One day, Eden was destroyed and thrown into the sea. The oldest volcanic islands in the world bear marks of the fall.” Jean-Paul Kauffman, L’Arche des Kerguelen

The world’s third most important population of subantarctic fur seals lives in Amsterdam island. They migrate to Amsterdam and Saint Paul islands every year to give birth to their pups. The rocky shores of these islands are the seals’ favorite terrestrial habitat.

Saint Paul’s crater is over 0.6 miles wide. The collapsed caldera has very particular geological and chemical characteristics such as hot springs, which led to the development of unique marine ecosystems. Large populations of subantarctic fur seals and southern rockhopper penguins live in this island, whose access is strictly prohibited.

Over 50,000 sea lions—the world’s largest population—and over 6,000 Antarctic fur seals live along the coast of the Courbet peninsula, in Kerguelen. 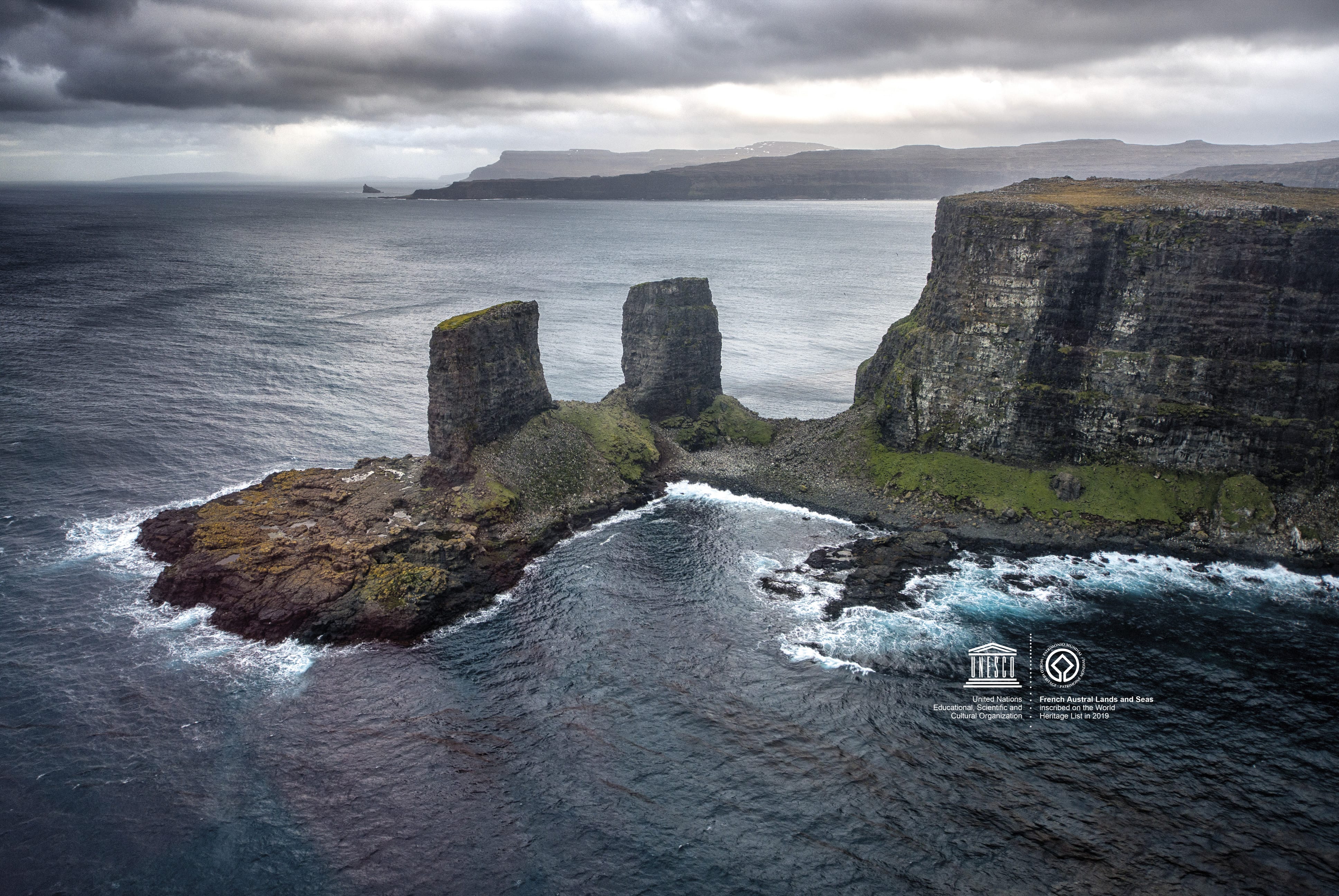 The arch of Kerguelen

The arch of Kerguelen

The arch of Kerguelen is the emblem of the French Southern Lands. It is located in the north of the archipelago and greets visitors on their way to Kerguelen. Its basaltic vault collapsed sometime between 1908 and 1913. Dozens of thousands of macaroni and rockhopper penguins live at its foot.

“This gigantic vault, which amazed so many navigators, reminds me of the entrance of a crypt. I imagine that the secret meaning of this long cursed archipelago is concealed there”. Jean-Paul Kauffman, L’Arche des Kerguelen

“To be outstanding examples representing significant on-going ecological and biological processes in the evolution and development of terrestrial, fresh water, coastal and marine ecosystems and communities of plants and animals”

The French Southern Lands and Seas have a large continental shelf and are situated at the crossroads of three convergent oceanic fronts, which makes them a productivity hotspot in an otherwise nutrient-poor ocean. This allows the development of a rich and diversified food web(1). The size of these nutrient-rich areas and their role in the regulation of the carbon cycle contribute to maintaining a healthy ocean.

The property is so vast that it is very representative of the southern biodiversity and on-going ecological processes. The islands are situated thousands of kilometers away from the closest continent and are thus preserved from the impact of human activities. They are excellent displays of biological evolution and unique models to monitor global warming.

1 Food web: a set of connected food chains within an ecosystem

The French Southern Lands and Seas have particular geomorphological and oceanographic characteristics, as well as a significant link between land and sea (islands are exposed to marine inputs via birds and breeding pinnipeds, whereas minerals such as iron flow into the ocean from the land). Thanks to these specificities, the sea surrounding the islands has a high primary and secondary production ( 2). Although Kerguelen’s plateau is the largest one in the area and can be described as an ‘‘oasis’’ for biodiversity, Crozet’s plateau and Amsterdam and Saint Paul’s shoals are equally productive. The French Southern Lands and Seas are situated at the crossroads of three convergent oceanic fronts, where the marine biodiversity is rich and diverse (fish, crustaceans, squids, etc.). This biomass is the main source of food for birds and marine mammals.

Areas of high primary productivity contribute to the regulation of CO2 on a global scale—they are called “carbon sinks”. Phytoplancton absorbs carbon dioxide during photosynthesis and releases oxygen. Similarly, the coastal laminaria Macrocystis pyrifera and Durvillaea antarctica fix the carbon into the seabed. The French Southern Lands and Seas thus contribute to reducing the effect of greenhouse gases, which makes them a key player in the fight against climate change and ocean acidification.

“To contain the most important and significant natural habitats for in-situ conservation of biological diversity, including those containing threatened species of outstanding universal value from the point of view of science or conservation”

The French Southern Lands and Seas are an exceptional site for the conservation of birdlife worldwide: they host over 50 million birds of 47 species. The world’s largest colonies of king penguins and yellow-nosed albatrosses, and nearly half the world’s populations of 15 species breed on the islands. They also host 8 endemic species, including the Amsterdam albatross, one of the rarest birds in the world.

The property also hosts large numbers of pinnipeds—the world’s biggest population of southern elephant seals and the third largest population of Amsterdam fur seals—and cetaceans such as the Commerson’s dolphin, a subspecies endemic of Kerguelen.

The richness and diversity of species of the French Southern Lands and Seas is unique in the Southern Ocean, and gives the property an outstanding universal value.

Elephant seals spend most of the year at sea. They spend 90% of their time underwater and dive to 2,600 feet beneath the ocean’s surface. The species was nearly driven to extinction at the beginning of the 20th century due to its massive hunt. Its population is now stable and the Kerguelen Islands are home to the largest population in the world.

King penguins are an iconic species of the French Southern Lands and Seas. They cannot fly but are excellent divers—they can swim up to 790 feet beneath the ocean’s surface. They gather in huge colonies that can reach over one million individuals. The Crozet archipelago is home to the largest population of king penguins in the world.

This species was hunted to the brink of extinction for its fur in the early 20th century. Although populations are now generally below their pre-exploitation level, Amsterdam hosts the world’s third largest population of subantarctic fur seals.

The MacGillivray’s prion is a species endemic of Saint-Paul. It went nearly extinct in the 1990s because of rats. Some birds had taken refuge on the Roche Quille islet and recolonized the island of Saint-Paul after the rats were eradicated. This species is rare and discreet, it is estimated there are 250 pairs. 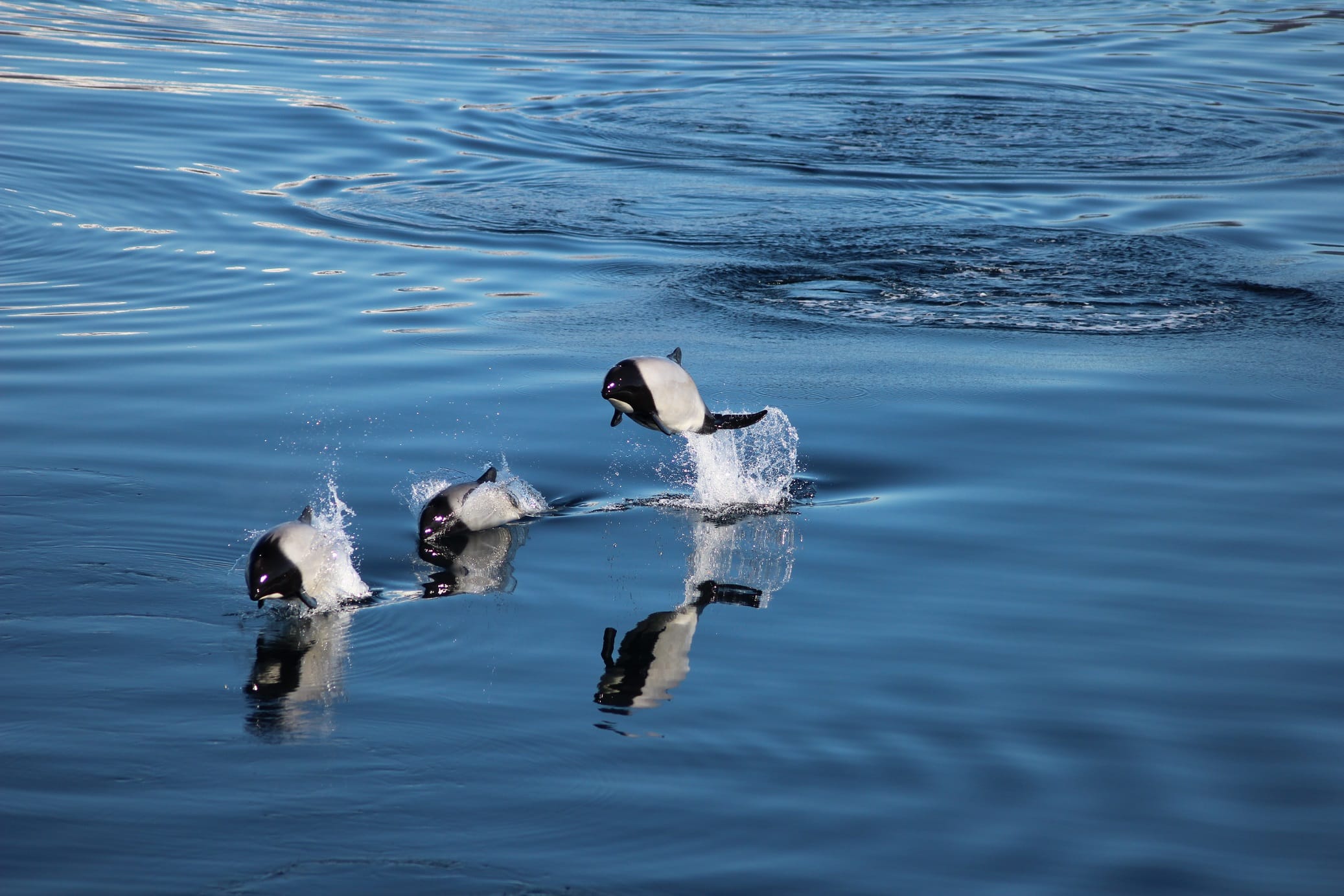 The Commerson’s dolphin is a subspecies endemic of Kerguelen. Dolphins are frequently seen in the coastal waters of the archipelago, mainly because they are attracted by boats. 69 individuals have been recorded in the Gulf of Morbihan, and groups of up to 50 individuals were reported outside the Gulf.

Two-thirds of the world population of yellow-nosed albatrosses breed in the French Southern Lands and Seas. 60% of the world’s population is concentrated on the cliffs of Entrecasteaux, on the island of Amsterdam. It is the largest colony in the world.

Killer whales are widely distributed in subantarctic waters. These generalist top predators feed on marine mammals, penguins and fish. Since the mid-1990s, orcas have been interacting recurrently with Patagonian toothfish fishing vessels operating in the waters of Crozet and Kerguelen. 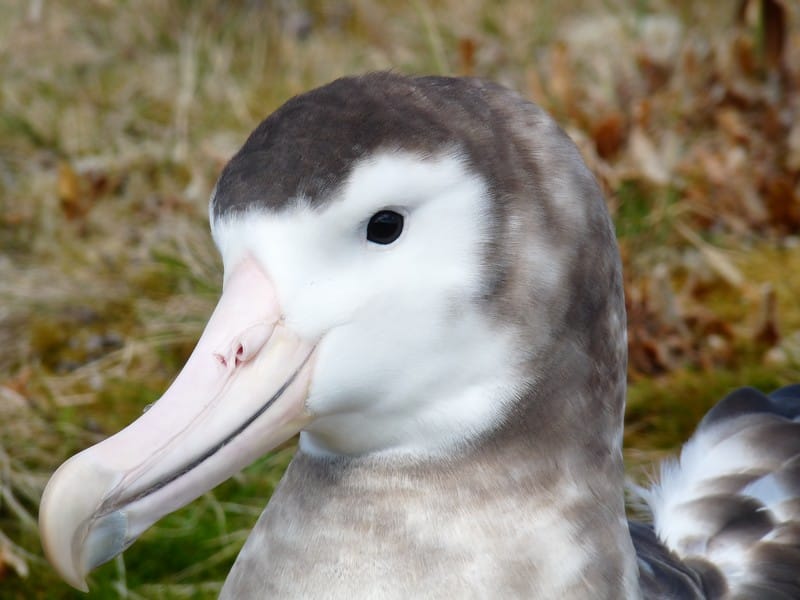 The Amsterdam albatross is one of the rarest seabirds in the world. It is endemic of Amsterdam, and there only subsist about 30 breeding pairs. A National Action Plan is being executed to ensure its conservation.

* IUCN (International Union for Conservation of Nature) categories determining the risk of extinction of species in the territory: Threatened species > VU, EN, CR – Other Categories > LC

In the same section

Do you agree to the use of functional and tracking cookies for audience measurement purposes and for the proper functioning of the site? En savoir plus
I agree I refuse